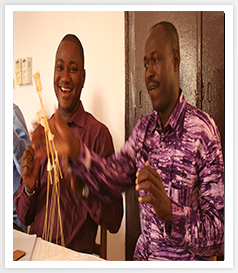 What is the participatory video (pv)?

The PV is a form of research in participative action or a set of techniques that includes a group or a human community in the making of its own film with the aim of facilitating the communication and the exchanges, in a horizontal way (between people and the communities) and also in a vertical way (between the communities and decision makers or financial and technical partners).  The idea behind the participatory video is that making a video has become easy and accessible and  offers an excellent and easy way of gathering people  to examine all the different issues, to express their concerns or to simply be creative and to engage themselves in capitalizing and sharing their experiences. The PV differs from classical documentaries and even though there is different forms of making documentaries that could sensitively express the daily reality and preoccupations of their subjects, documentaries remain the products of documentaries producers. Thus, most of the time the subjects in documentaries barely have a word to say on how they will presented in the film. The only few times that those subjects may be allowed, their possibilities and words are limited. In contrast, in participatory video, the subjects make their own film and can adapt the contents based on their perception, which is very important, and also control the way they will be presented in the film. In opposition to the classical video production process, in the participatory video it’s the communities themselves that handle the control of the video production with the help of trainers or facilitators.